Feature in Carlsbad Lifestyle: Get a New Look 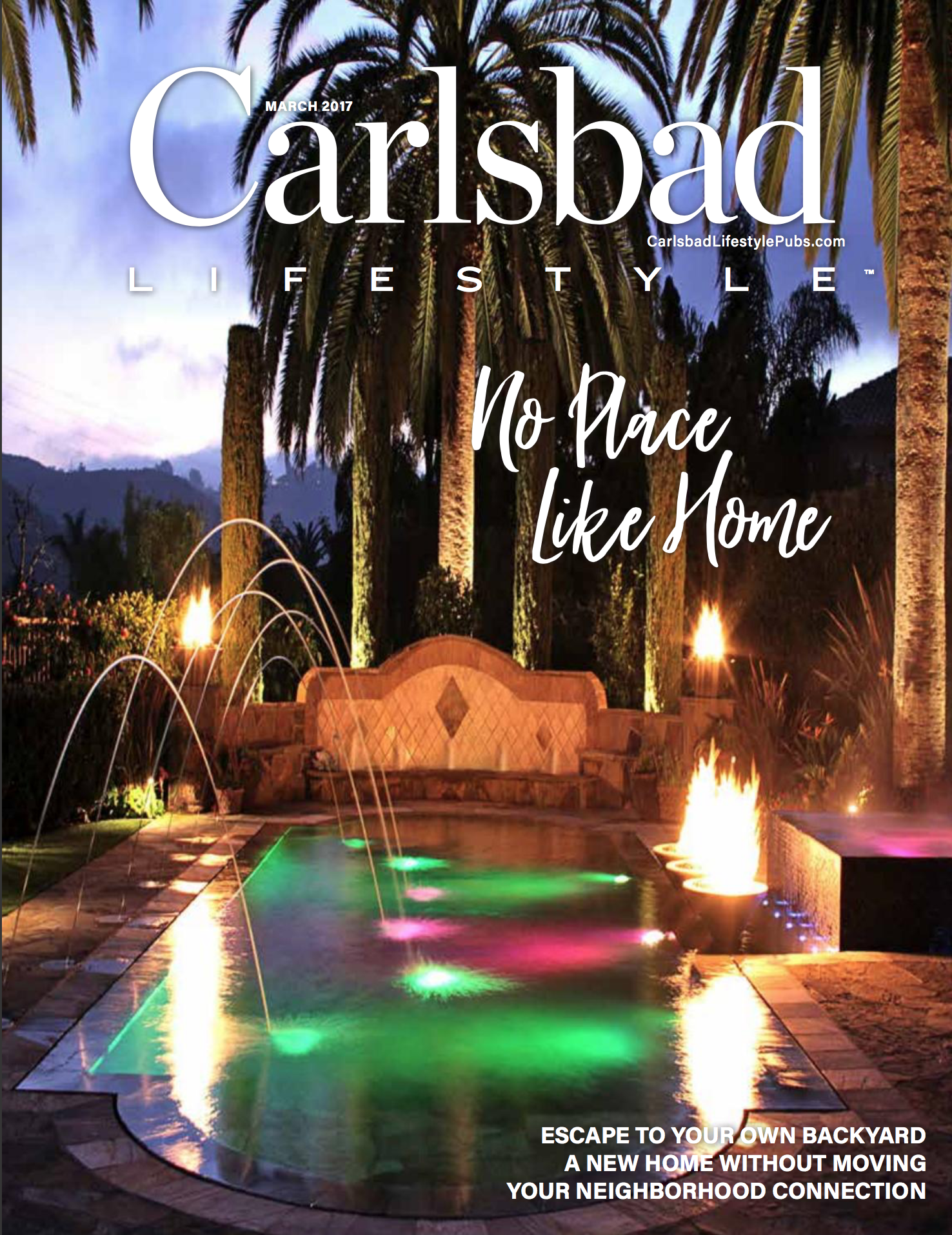 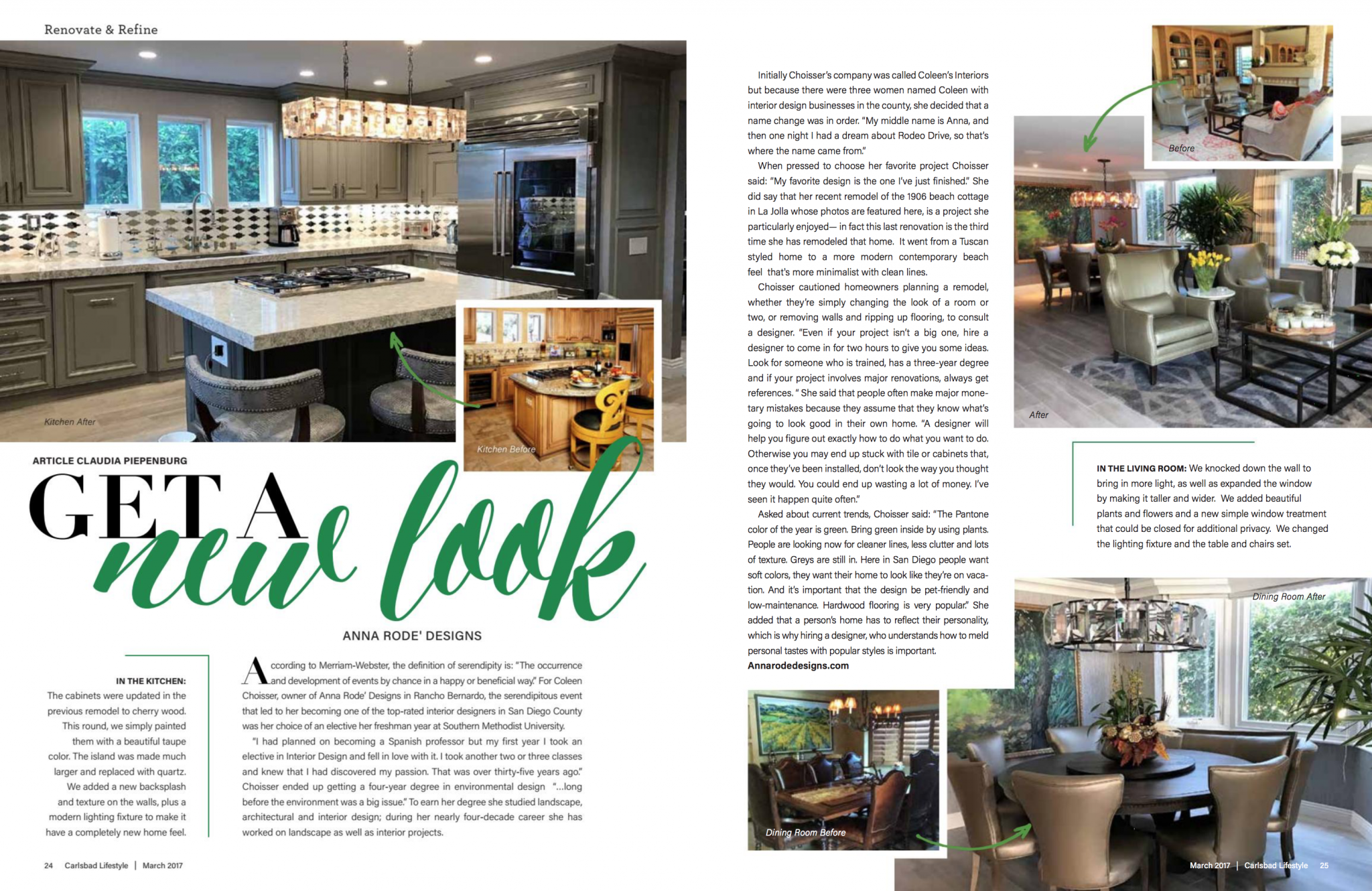 According to Merriam-Webster, the definition of serendipity is: “The occurrence and development of events by chance in a happy or beneficial way.” For Coleen Choisser, owner of Anna Rode’ Designs in Rancho Bernardo, the serendipitous event that led to her becoming one of the top-rated interior designers in San Diego County was her choice of an elective her freshman year at Southern Methodist University.

“I had planned on becoming a Spanish professor but my first year I took an elective in Interior Design and fell in love with it. I took another two or three classes and knew that I had discovered my passion. That was over thirty-five years ago.” Choisser ended up getting a four-year degree in environmental design  “…long before the environment was a big issue.” To earn her degree she studied landscape, architectural and interior design; during her nearly four-decade career she has worked on landscape as well as interior projects.

Initially Choisser’s company was called Coleen’s Interiors but because there were three women named Coleen with interior design businesses in the county, she decided that a name change was in order. “My middle name is Anna, and then one night I had a dream about Rodeo Drive, so that’s where the name came from.”

When pressed to choose her favorite project Choisser said: “My favorite design is the one I’ve just finished.” She did say that her recent remodel of the 1906 beach cottage in La Jolla whose photos are featured here, is a project she particularly enjoyed— in fact this last renovation is the third time she has remodeled that home.  It went from a Tuscan styled home to a more modern contemporary beach feel  that’s more minimalist with clean lines.

Choisser cautioned homeowners planning a remodel, whether they’re simply changing the look of a room or two, or removing walls and ripping up flooring, to consult a designer. “Even if your project isn’t a big one, hire a designer to come in for two hours to give you some ideas. Look for someone who is trained, has a three-year degree and if your project involves major renovations, always get references. “ She said that people often make major monetary mistakes because they assume that they know what’s going to look good in their own home. “A designer will help you figure out exactly how to do what you want to do. Otherwise you may end up stuck with tile or cabinets that, once they’ve been installed, don’t look the way you thought they would. You could end up wasting a lot of money. I’ve seen it happen quite often.”

Asked about current trends, Choisser said: “The Pantone color of the year is green. Bring green inside by using plants. People are looking now for cleaner lines, less clutter and lots of texture. Greys are still in. Here in San Diego people want soft colors, they want their home to look like they’re on vacation. And it’s important that the design be pet-friendly and low-maintenance. Hardwood flooring is very popular.” She added that a person’s home has to reflect their personality, which is why hiring a designer, who understands how to meld personal tastes with popular styles is important. 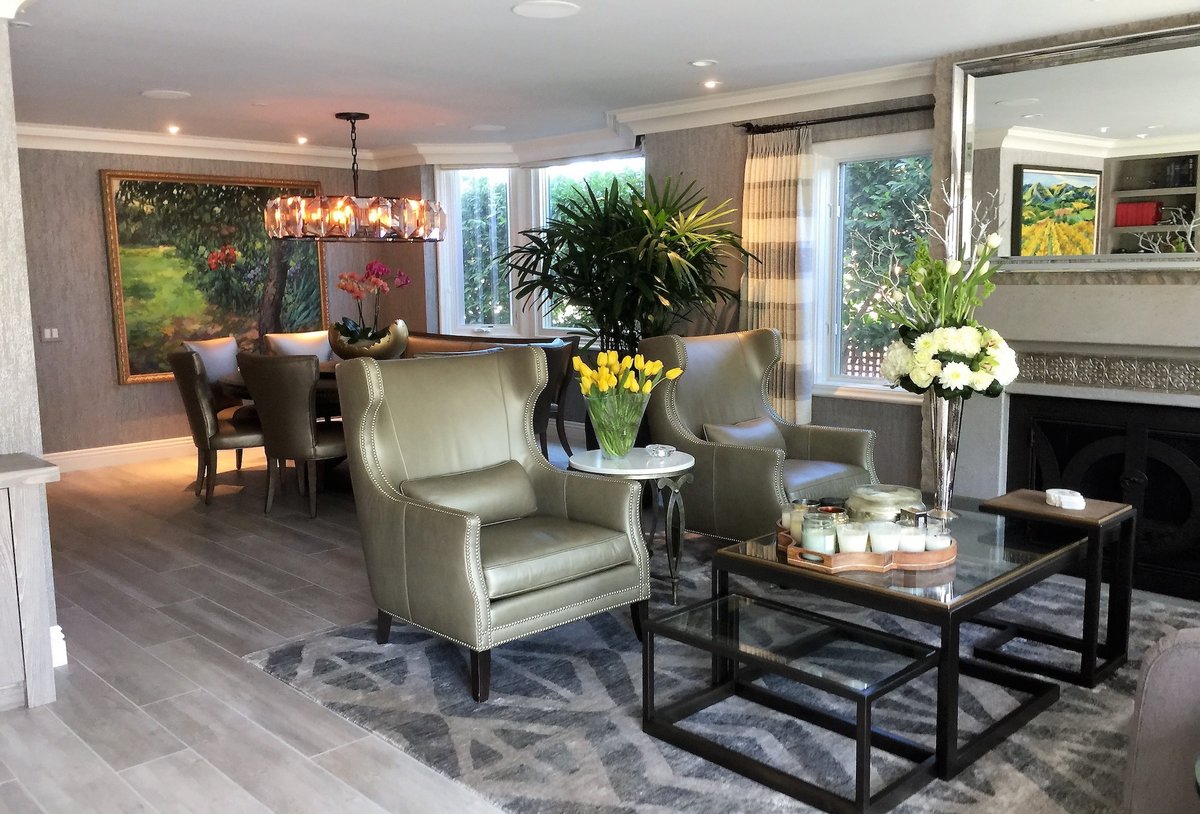 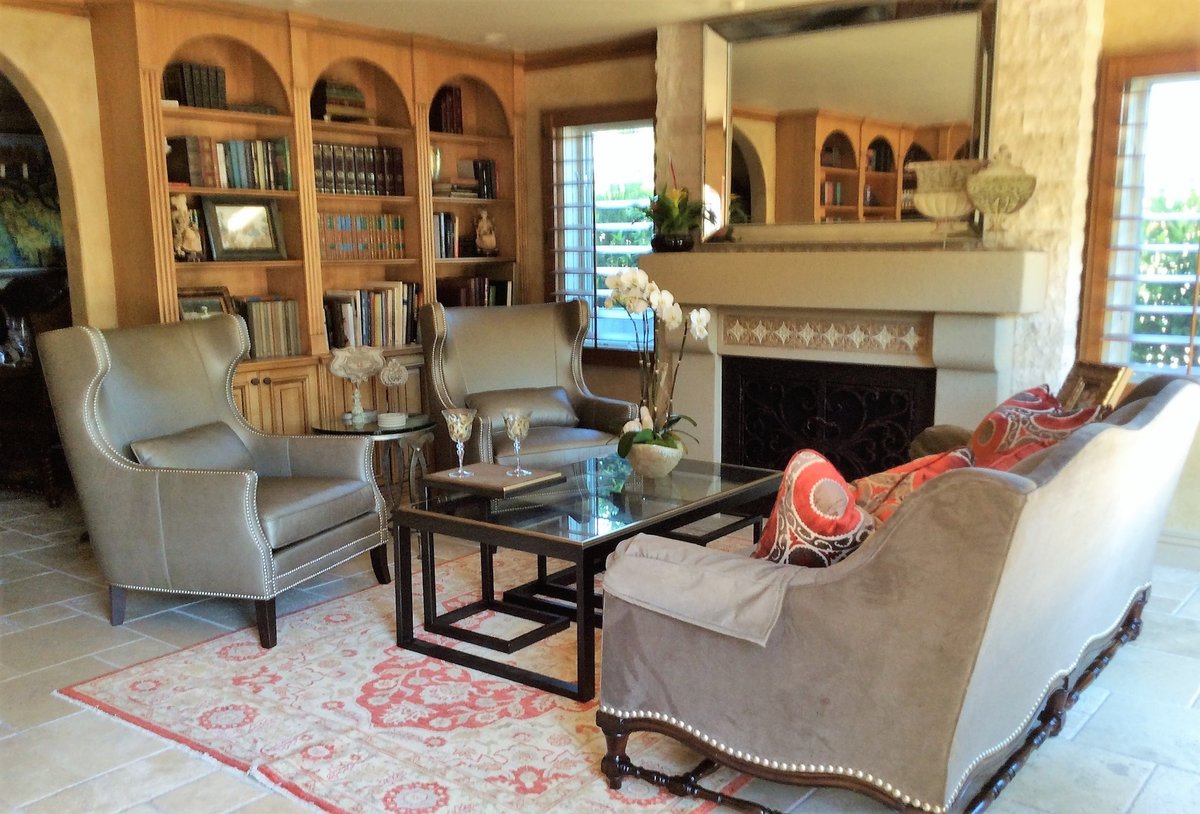 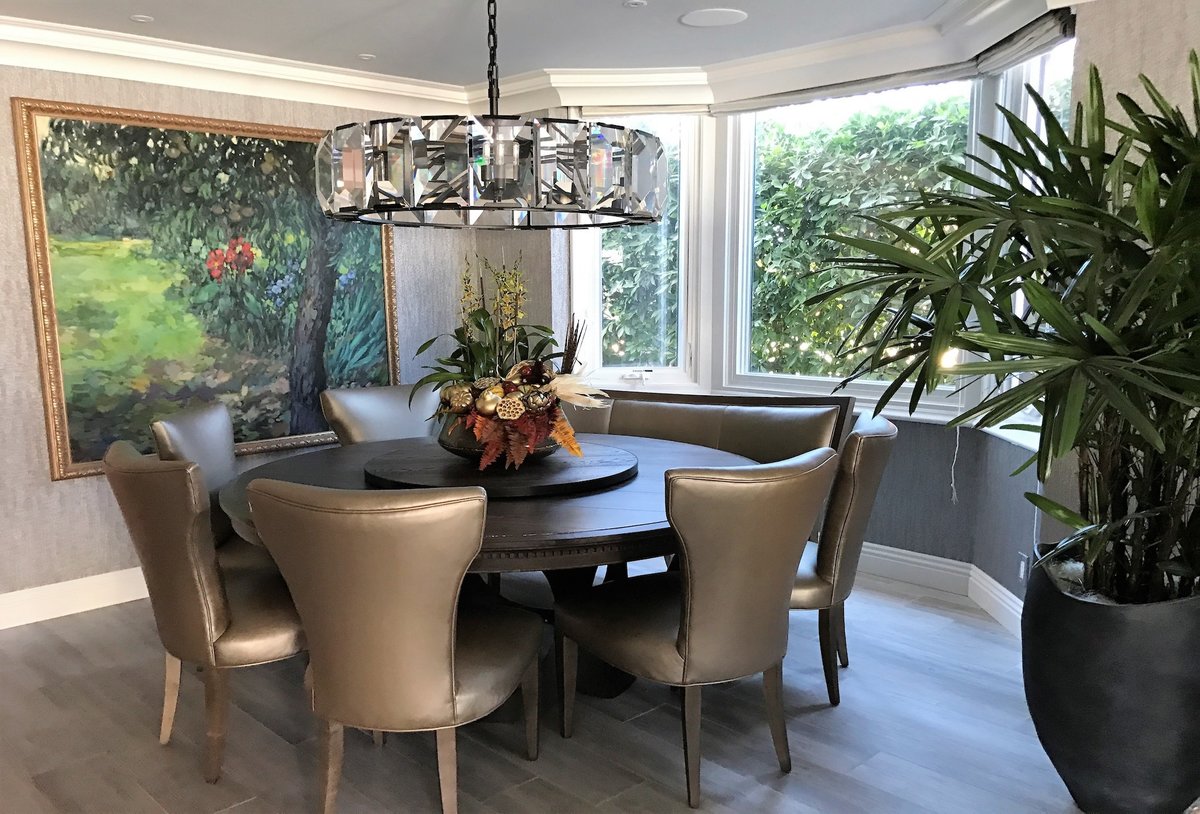 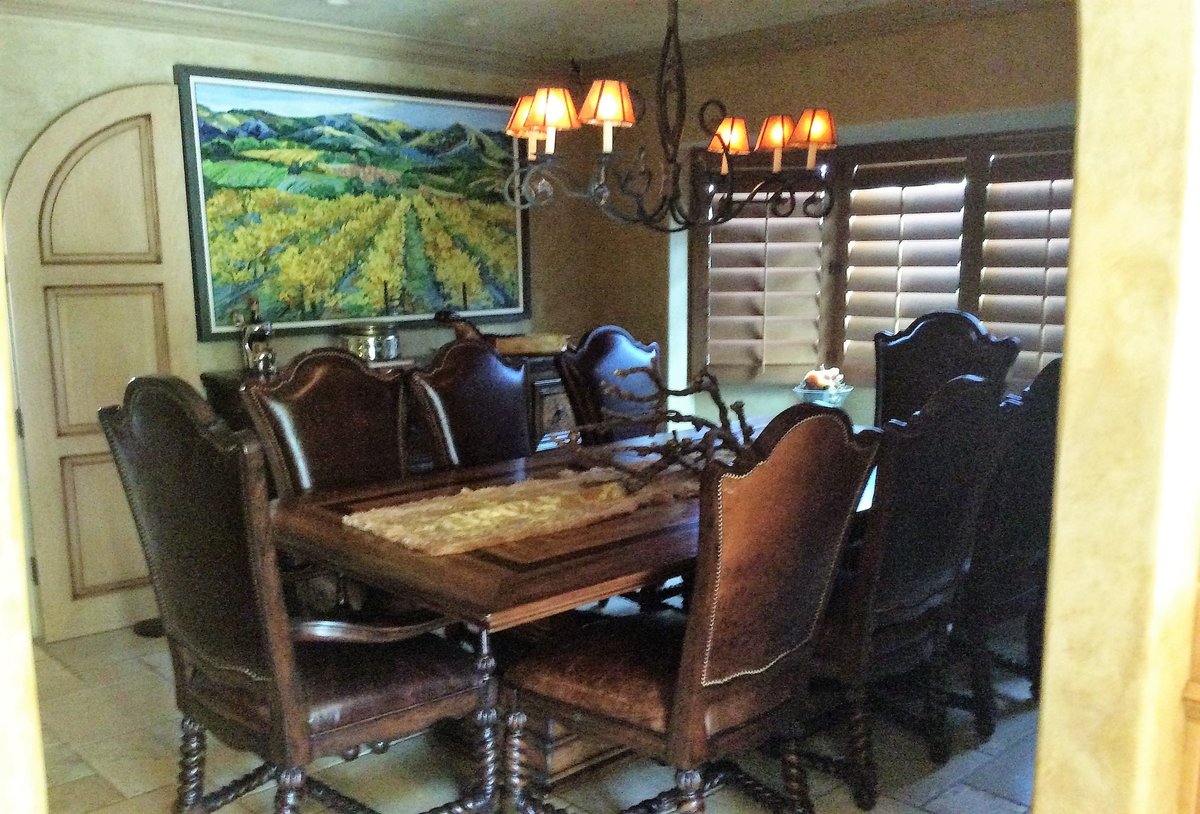 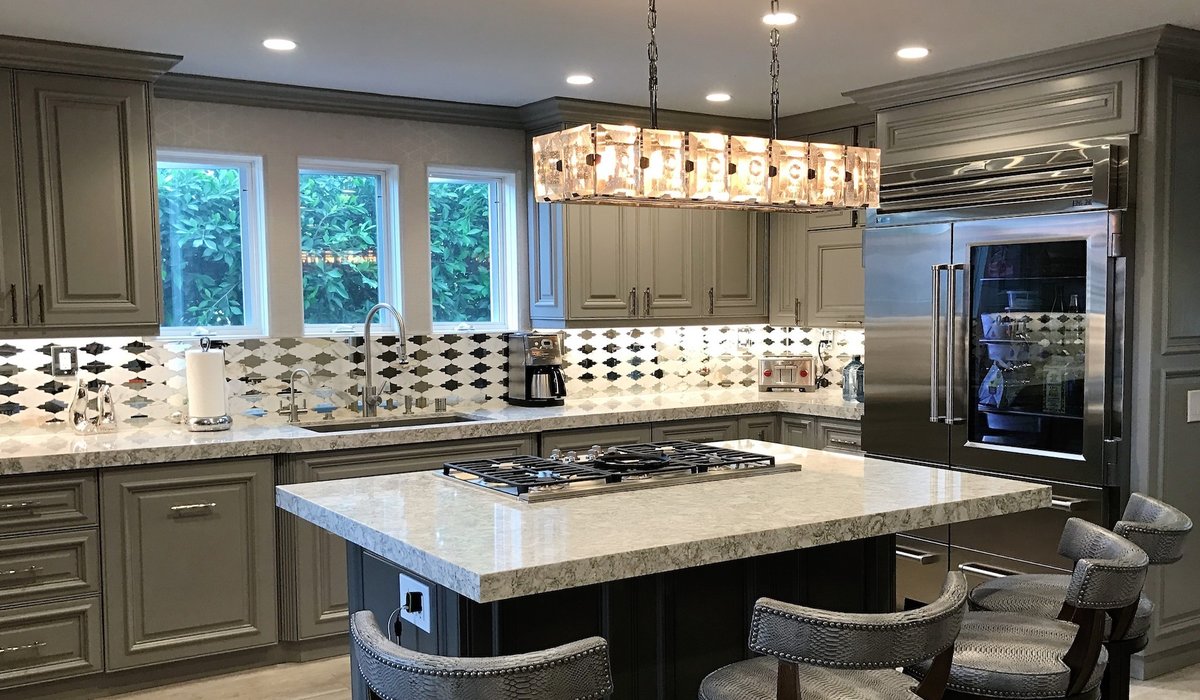 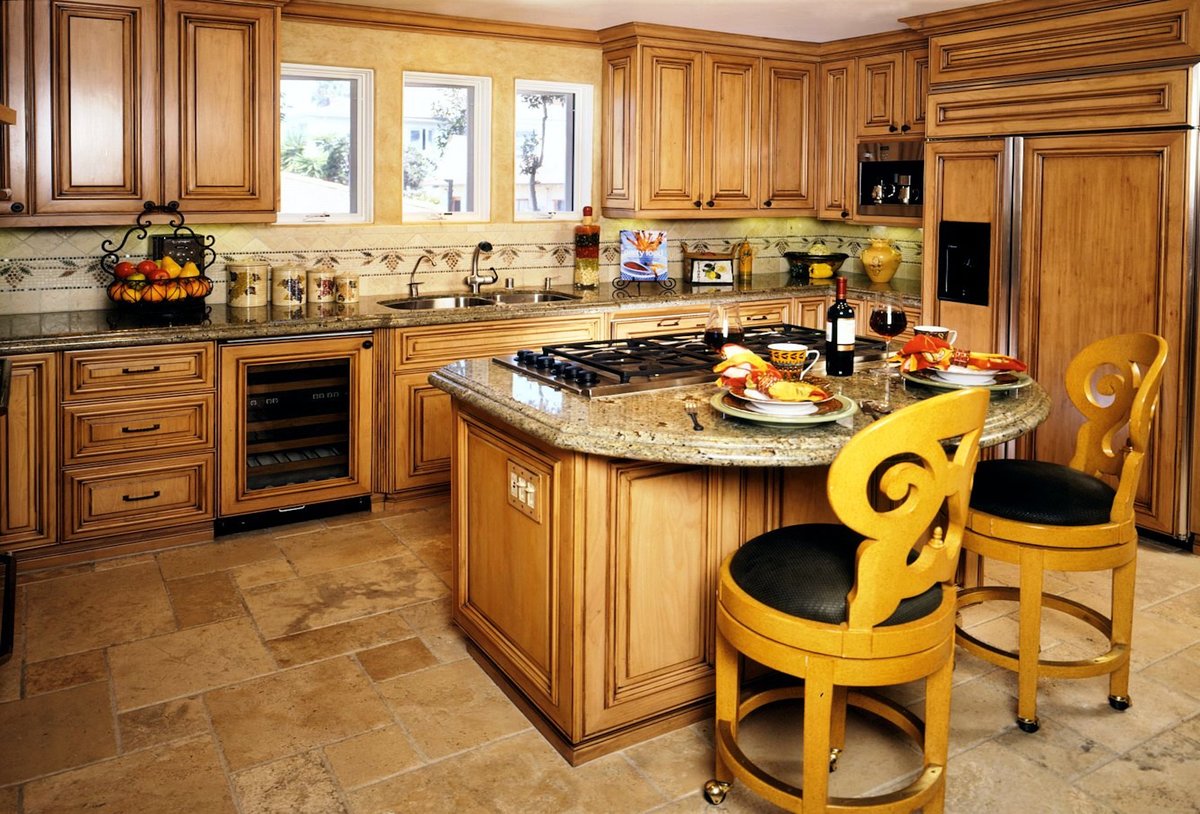 In the Living Room: We knocked down the wall to bring in more light, as well as expanded the window by making it taller and wider.  We added beautiful plants and flowers and a new simple window treatment that could be closed for additional privacy.  We changed the lighting fixture and the table and chairs set.

In the Kitchen:   The cabinets were updated in the previous remodel to cherry wood. This round, we simply painted them with a beautiful taupe color. The island was made much larger and replaced with quartz. We added a new backsplash and texture on the walls, plus a modern lighting fixture to make it have a completely new home feel.